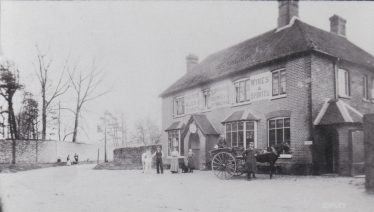 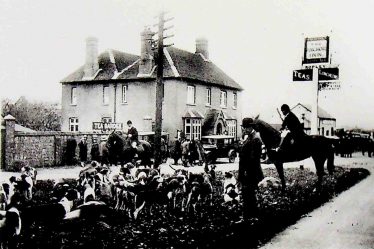 zoom
Hampshire Hunt outside The Anchor 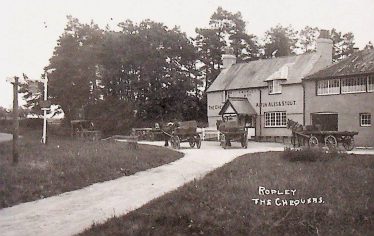 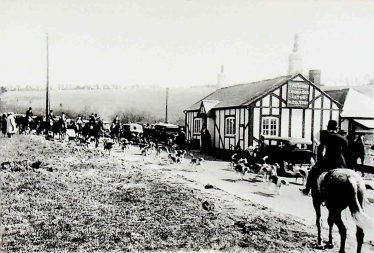 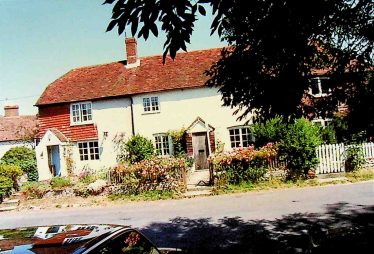 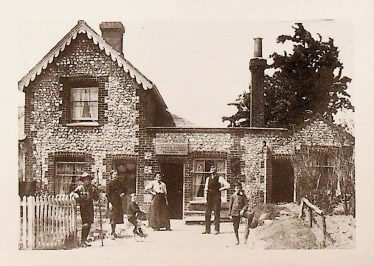 The Anchor in Ropley Dean, at the junction of Petersfield Road with the A31, was present by 1784 when it was mentioned in the Hampshire Chronicle.  It once had a coach house and stables with a water trough, and the publican kept a carriage and horses for public hire.  It was not a regular coaching station, but the coach from Southampton occasionally stopped here.

In the 1920s Thomas Hankin of Alresford established a motor works and petrol pump next to the pub. This was later known as the Anchor Garage.  It was eventually demolished to make way for the large car park.

A corrugated iron bungalow in the grounds was for many years the home of the Ropley Brass and Reed Band, where sometimes they held a ‘sixpenny hop’ before the old wooden hall was erected in Vicarage Lane.

Pic of Band in here

This hut (known in the 20th Century as the Bowling Alley and used as such until about 1960) was also the Lodge Room of the Anchor Lodge of the Royal Antediluvian Order of Buffaloes, long since dissolved.

For over a quarter of a century until the Second World War the landlord was one George Atterton, a sturdy character, who could be said to have known all the landed gentry of the district. The Hampshire Hunt used to meet here once in every season.

The Inn was the regular scene for the finale of Ropley’s annual Pram Race on Spring Holiday Monday until the race was extended to finish on the Recreation Ground.

In its last few years as a pub, the Anchor regularly hosted live music on Saturday nights and provided a free transport service with their ‘Big Black Bus’, which was actually a Ford Transit.  Attendance was often poor, and the pub closed at the end of 2012.  A community interest company ‘Raise the Anchor Ropley CIC’ was formed in 2013 with the aim of purchasing the pub as a community asset.  This was not successful, but under new ownership the pub was refurbished and reopened as a café/bar called The Ropley.  Since 2016 the building has been occupied by a restaurant trading as The Thai Lounge.

The Chequers Inn stood on the A31 by the junction with Gascoigne Lane.  It was present by 1814, when it was reported by the Hampshire Chronicle as a meeting place for the Hampshire Hunt.

In the 19th century it was a regular stop for the local mail cart between Alton and Winchester. Its early amenities included a bowling green and a billiard room. Sometimes marionette shows were performed and cheapjacks (pedlars) would hold an annual sale of household goods. A hilarious social event in former times was the annual competition to find the customer who could down a chamber pot full of beer.

At the beginning of the century a well-known landlady was Mrs Fudge, whose slowness in delivering orders from the cellar often caused irate customers to depart for other houses where the service was a little brisker.

Before the Second World War, the inn was modernised, and the landlord Mr S. Lesley was probably the longest serving host until he retired after some thirty years to join his son in New Zealand. His successor, Mr S. Morgan, supervised some reconstruction and renovations. The pub closed in 2009 and the site has now been redeveloped into a small housing estate.

The Mid-Hants Railway between Alton and Winchester was opened in 1865, having been constructed over the previous two years by teams of Irish navigators, known as navvies. They lived in encampments called shanty towns, ‘shanty’ deriving from the Gaelic for ‘old house’.  The navvies were notorious for their hard drinking.  For those constructing the Ropley Soke section, the nearest public house was the Windmill Inn, a mile away in Four Marks.  A beerhouse was therefore built in the Soke by the Alton Brewery (acquired in 1903 by Courage’s) and named The Shant.  Intended to be temporary, it survived as a public house after the line was completed and was a regular meeting place of the Hampshire Hunt for many decades.  In the late 1970s it was briefly known as Nips Inn, apparently because ‘Nip’ was the nickname of the landlord Mr D. Sandell. It then passed to Mr I. Matthews and was renamed the Watercress Inn.  The building was reputedly haunted by the ghost of a former landlady. After closing in the mid 1980s it was used as an Indian restaurant called the Star and then as a kitchen showroom. It is now a private house and has reverted to its original name of The Shant.

At the eastern end of Church Street, next to the village pond, is a row of three cottages believed to have been built as a single dwelling in the early 17th century and used as an alehouse in the early 19th century. Collectively known as Sunnyside Cottages, Numbers 1 and 2 are now called Bell Cottage and Five Bells respectively.  The name presumably derives from the five bells of St Peter’s church.

In Annals of Old Ropley, Marianna Hagen tells of a group of young men who plotted against the vicar Samuel Maddock, shortly after his arrival in 1818,

‘in the village ale-house. (Possibly at “The Five Bells” at the top of the village near the pond – now turned into cottages). This was known as “Hells Corner.”’

Bell Cottage has a cellar with an opening to the front which may have been used for delivery of beer barrels.  The property is not described as a public house in any of the nineteenth century censuses but one of the cottages was occupied by members of the same family, the Privetts, who ran the Star in Hammonds Lane. Perhaps the business was moved from one location to the other, to be closer to the village centre.

The 19th century censuses show a beerhouse called the Star Inn in Hams Lane, now Hammonds Lane.  It was run by members of the extensive Privett family:  Richard in 1851 (shown as a beer retailer in the 1849 Post Office directory), Mary in 1861, Edward in 1871, Elizabeth in 1881, 1891 and 1901.  In the late nineteenth century, inquests were occasionally held there.  By 1911 it had passed to the Lion Brewery of Winchester, which was taken over in 1931 by Strong & Co of Romsey who in turn were acquired by Whitbread in 1969.  The Star had a succession of licensees in the twentieth century, including Mrs Snell (known as Bubbles). It was a meeting place for the local cricket and bowling clubs. In 1974 it became a free house under its last owners, who extended the building. It closed in the 1990s and is now a private home.

Underwood, Peter (1983) Ghosts of Hampshire & The Isle of Wight