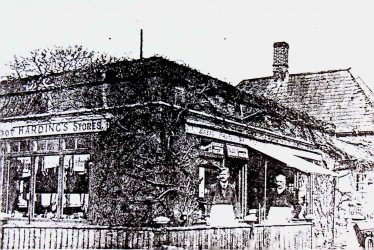 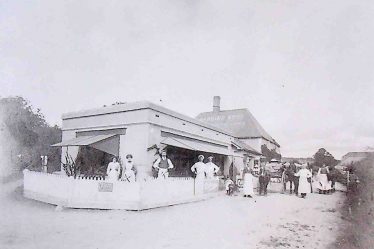 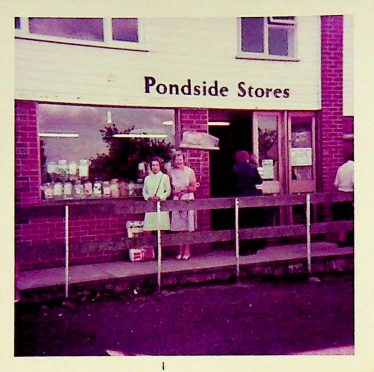 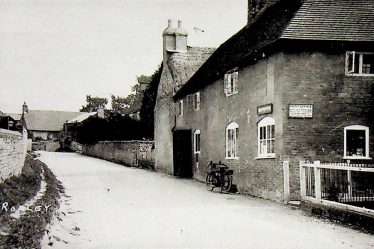 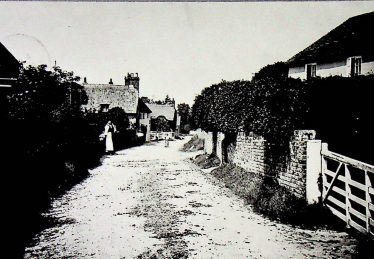 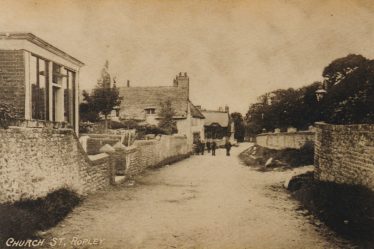 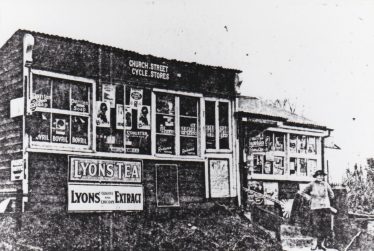 This shop was situated in the 19th century at the junction of Court Lane and Gilbert Street.  In the 1870s it was owned by William Heath and known as Heath’s Stores. At that time the shop and bakery faced The Old Farm House. When Mr Heath retired in 1884 the business was taken over by Mr Henry Harding, who died in the following year, leaving his wife to carry on the business with the help of a manager. In due course Mrs Harding’s three sons inherited the store, which included a bakery producing daily supplies of fresh baked bread. In those days the groceries and other goods were stocked in large quantities such as sugar in 2cwt bags, flour in 2cwt sacks, and dried fruits in 56lb boxes, and everything was weighed up or cut separately for each customer. When a customer paid an account a pint of beer was offered to a man, a glass of port to a lady and a pack of sweets to a child. At Christmas each customer received a pound of currants and raisins, and a colourful calendar.

Almost every family in the village kept two pigs. The feed was regularly delivered and when a pig became prime, it was brought to the grocer who killed it and prepared the carcase. The account was settled on the proceeds and another pig put in the sty. On Sundays the neighbours brought their Sunday dinners and cakes to be cooked.

Before World War I an extension to the shop was built up to the corner of Court Lane, and the old shop was used to enlarge the storage space. The bakery was retained with two big ovens and ‘bunts’ of copse wood stacked in the yard, similar to a farmyard corn rick. Two horses and vans were kept and the bakers delivered their own bread during the day. In 1920 there was a red letter day when their first Ford van came into service.

The Harding brothers retired in 1946 and the shop was carried on by Mr C. Forster, a leading village cricketer, who was shortly afterwards obliged to close the bakery, and finally to close the store itself in 1963.

The Dene Stores and the neighbouring houses were built in the early 20th century by Joseph Darvill of Hook Saw Mill. The shop was run by Thomas J. Turner, who lived on the premises. In 1909 a post office was opened in the shop in response to a petition to the Postmaster General by local residents.  Thomas Turner was declared bankrupt in 1912 and the shop was sold.  In the 1920s it was run by Thomas Tomlinson and later by Mr and Mrs Kennett.  The International Stores operated an adjacent bulk storage and distribution depot during World War II. The last incumbents, John and Cecily Wyatt, ran the store for many years. They retired in 2012 and the store is now closed.

In the early 20th century, the Spratt brothers ran a cycle agency and repair shop in a wooden and cor­rugated iron shanty on piles on the grass bank opposite the village pond, with a flight of stone steps leading to the shop door.   In the 1920s the premises passed to William Spratt’s sister Agnes Mole and her husband John.

They ran a small store selling almost anything from sweets and groceries to newspapers, sewing threads and stationery. Stock was stored in an open space on the upper floor and passed down as required in baskets or on ropes. This business was eventually taken over by Mr and Mrs A. Wardle, who demolished the old wooden shack and erected a new building in 1968. The Wardle family ran the business successfully and sold it to their successors, Mr and Mrs Howell, to carry on from 1973 to 1977, during which time further improvements were carried out. Further changes of occupancy took place until June 1984 when Mr and Mrs W. Corrigan modernised the store still further. The shop also housed the post office. It closed about 2004 and the building has been a private house ever since.  A satellite post office service was provided from West Tisted for nine hours a week until the Courtyard Shop opened in 2006.

The house in South Street opposite the foot of Hammonds Lane is marked as a post office on 19th century maps.  It was a sub-office of Alresford. William Williams, a tailor and draper, was appointed as ‘receiver’ at some time in the 1840s and was succeeded by his sons John and then George, who also continued the tailoring business. The post office moved to Church Street around 1890 and the South Street building became a private house called Holmfield.  In the early 20th century, Arthur and Charlotte Hale established a shop in a wooden extension.  Mr Hale, who also worked as a carpenter, was the son of the blacksmith George Hale who ran the forge in Church Street. By 1920 the shop had been taken over by George Smith. In the 1930s it was run by Frederick Shelcott and was known as Shelcott’s Stores. It later passed to his son Donald, who instigated a delivery service.  The shop closed when he retired in the 1970s and is now a private house again.

Around 1890, the post office was relocated from South Street to the house now called Post Cottage in Church Street. George Williams was then the sub-postmaster and a tailor.  In the 1920s the building became a private residence and the post office moved into the grocer’s shop further up the street.

The Grade II listed building now called The Post House dates from the late 18th century. In the 19th century a projecting shopfront was attached to the front to contain a grocer’s shop. There was also a bakery at the rear of the building.  The shop was known for a time as the Malt Stores. In the early 20th century it was run successively by Albert Norris, William Parmiter who was the church sexton, and finally Alfred Chick who was sub-postmaster here in the 1920s.  By the late 1930s the shopfront had been removed, to be replaced by a large bow window, and the premises became a private house.  The post office was relocated to Laurel Cottage in Hammonds Lane.

Other shops were present in the village at various times. There is said to have been a butcher’s shop, destroyed by fire in 1912, next to the Post House where Mount Pleasant now stands.  A saddlery was present in Church Street in the 1920s. There was a general store run by F.P. Osgood next to Homeside in Vicarage Lane.  In the 1930s a Miss Heath had a shop in Soames Lane.  Monkwood had a post office for a time; William Betteridge was sub-postmaster there in 1927.

A community-owned general shop and post office was opened in a former Victorian stable block in Church Street in 2006, with the aid of grants from various organisations both local and national and with the support of Ropley residents who made generous donations and long-term loans. The shop is run by local volunteers and some paid staff. It has become a social hub where locals can chat, obtain tickets to local events and support local suppliers by buying the produce of Ropley and surrounding areas.  In 2022, work was carried out to create extra storage space and an enclosed refreshment area.

Hampshire Chronicle and other newspapers accessed at https://www.britishnewspaperarchive.co.uk/

Carole Oldham from Ropley Past and Present edited by David Fisher