The history of Ropley begins with the parish’s earliest finds; a flint knife from the Mesolithic period around 9,000-4,000 BCE. This knife now sits in stone age display of the Alton Curtis Museum. Although there was most certainly human presence in the area prior to this period, in the Paleolithic, no evidence exists of this yet. In the later Stone age, the Neolithic approximately 6,000-4,500 years ago, we begin to find far more physical evidence for activity in the parish. A large number of neolithic flint finds have been found over time, with some recorded by the British Museum on the Portable Antiquities Site online.

The production of flint tools requires the “knapping” or removal of flint from a larger flint nodule to create tools. When the larger flint is struck deliberately with enough power from an angle a characteristic break is formed which can be identified as either a waste flake (removed to create the tool) or the tool itself. These flint implements would have been used by the earliest farmers to hunt, to cut, to whittle and scrape like with a flint scraper pictured BELOW. 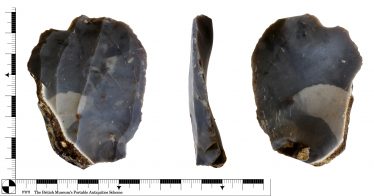 Later in the Bronze Age we see the first concrete signs of settlement in the form of Tumuli; a burial mound. These graves would’ve been prepared for high ranking tribal leaders or officials who were worthy enough to have a ceremony prepared and several tonnes of soil piled atop their corpse. In Ropley there are 2 and potentially more of these, both stemming from this time. 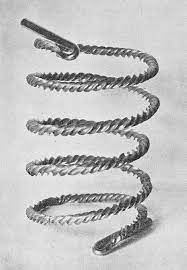 Ropley also has some national renown for the Lyeway torc (RIGHT). Found in the 1840s near Lyeway, the golden arm band made of twisted gold marks one of the best preserved and remarkable gold torcs in all of England. The piece now sits in the Cornwall County Museum and was officially dated to around 1,000-800 BCE. A bronze axe was also found some years ago. On an aside, it is a common misconception that with each change of material age; stone to bronze to iron, a complete revolution and move to a new material culture occurred. The new materials were very costly in time and resources to produce, hence could only be afforded by some, for some applications. For example flint was still in frequent use well into the bronze age, and 16th Century flintlock pistols relied on knapped flint to create a spark. Hence bronze age flint finds are more of a common find than bronze items of that time.

The iron age marked a full transition to agricultural life with settlements starting to take shape as small farmsteads we call “enclosures”. These small abodes would have consisted of a small wattle and daub huts with a thatched roof often protected by coppice fence and sometimes with a protective ditch and bank earthwork. Recreations of these huts can be seen at Butser hill Ancient Farm. Settlements like these dot Ropley and their imprint is still left thousands of years later in the form of crop marks visible as circles and or rectilinear features on satellite images. These mark an active iron age community in the Ropley of 2,500 years ago. Period potsherds and coins, some from solid gold, reinforce the undeniable settlement. 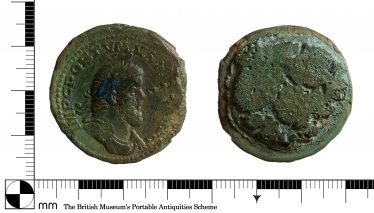 Sestertius coin of Postumus circa 260AD found in Ropley With permission from the Portable Antiquities Scheme https://finds.org.uk/database/artefacts/record/id/1050920

Roman Ropley is something of an enigma. Coins (RIGHT), brooches, buckles, spoons and even a gold ring litter the parish yet no certain settlement evidence exists. Although in some places roman potsherds have been found, which is typical of settlement, nothing can be said for certain as there is no substantial evidence to point to any form of roman villa or farmstead. However, it is very likely that a roman villa exists somewhere in the parish as has been proposed by Chris Heal in his book “The Four Marks Murders”. We can deduce this as a near regular distance between all villas in Hampshire exists; around 6km, and there is a noticeable void somewhere in the vicinity of Ropley.

After the Romans evacuated their British colony some 1,600 years ago, the British Isles and much of Europe too, entered the dark age, known as such because of the lack of written records, the overall decline in quality of life and a surgance in looting and pillaging of settlements. It is no surprise then that very little is known about Ropley in the dark ages. We do not know when the area was settled by Germanic peoples nor do we have much physical evidence of their presence, but we do have a great linguistic legacy left by them. Those who settled Ropley were Anglo-Saxons, unlike the neighbouring Jutes in the Meon Valley. The Saxons who settled Ropley gave its name likely from a patriarch of a household or small community called Hroppa. Hroppa lived in a woodland clearing, in Old English a ‘leah’, hence they may have called the settlement ‘*Hroppan-leah’. So we can translate the name as (roughly) “Hroppa’s settled woodland clearing”. Almost all of Ropley’s hamlet, field and lane names stem from these Saxon invaders who brought over old English. They named Ropley Dean, meaning the valley (Old English ‘denu’) they named Harcombe meaning “a valley where goats are kept”, and they named neighbouring West Tisted, Medstead, Bighton, Bishop’s Sutton etc. It is this trace that the Saxons left of their landscape that is more valuable than any coin hoard, or golden buckle, because even though this time is largely mysterious and forgotten the linguistic legacy left tells us so much about their environment and their relationship to it. It is with little question the most important change in all of British linguistic history. The Saxons did not however dissapear without a physical trace, as of yet a few finds from the latter part of this era have appeared. Saxon potsherds dotting some ancient parts of the parish and most significantly a limestone coffin that was discovered accidentally during the building of the Mid hants railway in the 1860s. These very tantalising finds are all we have so far to show the origins of Saxon Ropley.

With the Norman invasion in 1066 we consider the beginning of Medieval England, the end of fractured kingdoms and the end of the Danelaw, for the first time since the romans a unified domain is formed. Our medieval history is fascinating, and we begin to see the parish coming into its own. The Manor of Ropley becomes a pawn of the Bishopric of Winchester one of the most powerful and wealthy positions in all of England and even Europe. The peasants of Ropley are also not as elusive as their Saxon ancestors. In order to track his expenses and accounts the bishopric creates many legal documents naming and detailing a lot of information about Ropley and its inhabitants. We see familiar names start to appear, such as the Budd family who have lived in the parish since the 1400s and potentially earlier. And for once the physical evidence of settlement still stands, St. Peters church for example an impressive feat of Norman architecture. Smugglers in Monkwood and the Smithy on Church Street, are both houses with parts dating from the 1400s. The archaeology of this time is also wealthy, with hammered silver coins, potsherds, buckles, cauldrons and decorative metalworking pointing to farmsteads and holdings lost to time. Some of these finds give insight into the nobility of Ropley such as this gold plated and enamelled buckle plate dating from the 1200s found in the parish last year (BELOW). By the early 1400s Ropley manor was gifted by William Wykeham to his founding of Winchester College, still today parts much of the parish are still part of the property of Winchester College. Gold plated buckle plate from the 1200s With permission from the Portable Antiquities Scheme https://finds.org.uk/database/artefacts/record/id/1050911

The post medieval period of Ropley is incredibly well documented. The court rolls of Ropley, documents detailing land acquisitions and transfers dating back to the 1300s compiled in the 1600s are a remarkable view into the lives of many people that have lived, worked and farmed in Ropley over the centuries. These papers are all remarkably well preserved in the Winchester College archives and are in the process of being uploaded to the online archive. Four Marks, Ropley’s former hamlet was first recorded in one of these documents as ‘fowremarkes’ in the 1550s. By the mid 1600s the civil war was raging in Hampshire, Ropley was between two major battlefields in Hampshire, Alton in 1643 and Cheriton in 1644, the parish therefore fell victim to a lot of military traffic. It was said that the troops of Sir William Waller mustered on Four Marks Hill. The traces of military footfall are to be found in some places in Ropley such as a lead cannonball made for a Falconet Cannon (BELOW) and buckles. 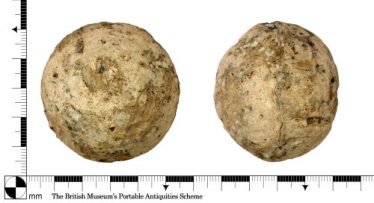 In the early 1700s Ropley was the first parish nationwide to be enclosed by act of parliament, this part of Ropley’s history is likely most well known as enclosures are arguably the single-most significant change to British landscape and how we perceive it. Still now long rectangular fields in Four Marks are visible, where once the common fields of Ropley stood.