You are here: HomenextVillage historynextProminent People and SocietiesnextJohn Tibble memories of visiting Ropley as a child

John Tibble memories of visiting Ropley as a child

My most vivid memory of Ropley as an 8 year-old in 1961 is being collected from the railway station in a Rolls Royce and driven in style to Hall Place, a wonderfully large and mysterious house in the heart of the village. Further details of this experience will appear later in this account, but first some context is required. I should add that some of the names and details of what follows may not be strictly accurate and I hope the reader will forgive me for this.

My father, William Hallett Tibble was born to Charlotte Tibble and raised in South Street, Ropley. He had two sisters, Nell and Lottie and a brother Henry. Charlotte, my grandmother was in service in the area and I really, to my regret, know very little about her but assume she must have been quite a character. I understand that my Grandfather was a butler called Frederick and although his name appears on my Father’s birth certificate, I do not think they were married.

Aunt Lottie married and became Mrs Passenham and lived locally as far as I know. I think her husband was killed in WW1.

Aunt Nell was in the WRAF in WW2, was then married and had a child which died. She was then divorced and subsequently worked at Hall Place as housekeeper until her death from cancer in 1964.

I met Uncle Henry once as a child, but further contact was lost, although we kept in touch with his daughters. 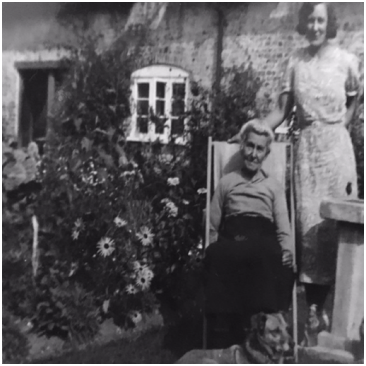 My grandmother and Aunt Nell in the garden at South Street

Mr Turner, my Father and the Royal Marines Band

My Father attended Ropley Village School and was taught by a Mr Turner who, my Father said was nicknamed “Scuggy” for some unknown reason. This man was, I think, very influential with my Father and he encouraged and supported him in his wish to become a Band Boy in the Royal Marines. My Father kept in touch with Mr Turner after he joined up and sent him a photo in his new uniform. In return, Mr Turner sent a post card of himself with the church choir. 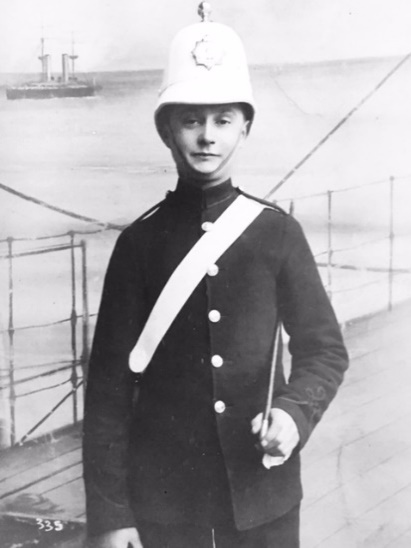 My father, William Tibble as a Marine Band Boy. 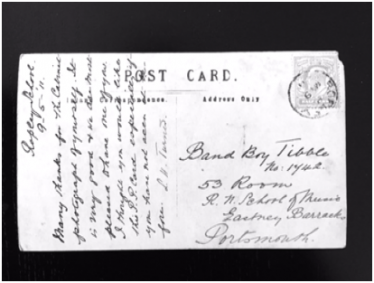 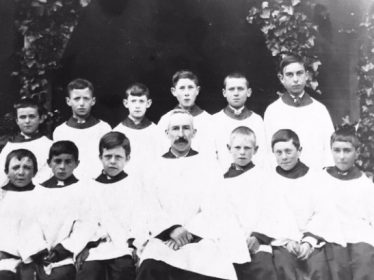 My Mother, Father and I visited this magnificent house several times from 1955 to 1963. It never ceases to amaze me that these short stays have left such vivid and pleasant memories with me.

The house was occupied by Henry Stuart-Smith and his housekeeper my Aunt Nell. I was introduced to Mr Stuart Smith at the age of about 2 years and I found him frightening and apparently burst into tears. When we were ushered into the posh drawing room for an “audience” in later years, I remember him being a very frail, but benign and friendly man. We were told he had been a Director of Pickfords Removers and had been very involved in the foxhunting scene. He may have even been master of the Hampshire Hunt at some point. His wife was also a hunt fanatic and I believe there is a picture of her somewhere on the internet riding to hounds locally. The couple tragically lost a daughter, who succumbed to peritonitis following a burst appendix. I know this because I saw a newspaper cutting about it pinned to the wall in the stables.

Henry Stuart-Smith lived to a great age (maybe even to 100) and spent his final years in a nursing home after my Aunt’s death.

I do not remember a great deal about the interior of the house, except there were a great number of fox’s masks and tails displayed on the walls. There were a several long-case clocks which chimed at different times of the day and night. I remember being particularly fascinated by one of these which showed the phases of the moon.

I remember Aunt Nell as a formidable lady with a heart of gold. She experienced much sadness in her life and I remember my Father supporting her through divorce proceedings. As brother and sister, they were close in that “don’t show your feelings” way of the 50’s and 60’s. 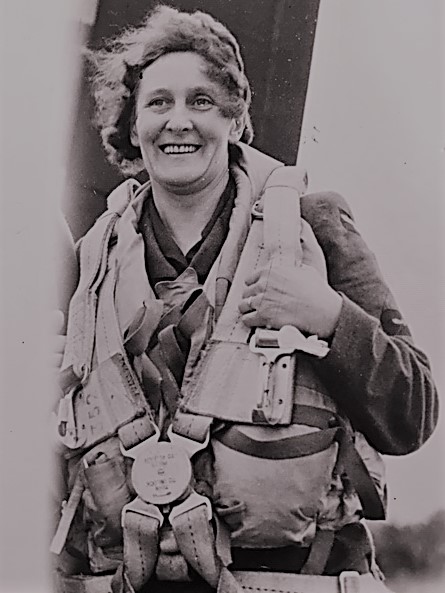 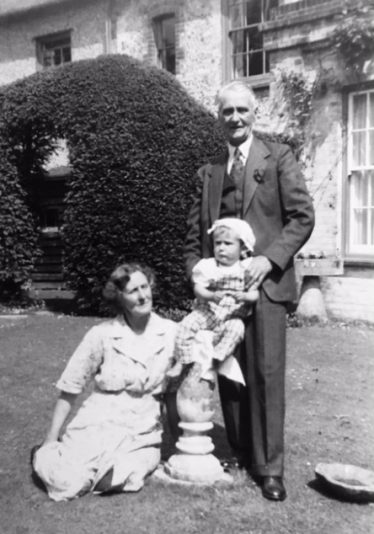 I think she did a lot of extra caring duties for Mr Stuart-Smith and was a good cook and housekeeper. She had very little in the way of possessions but was proud of her very smart pushbike. She had a little sitting room off the kitchen which contained a radio and a very old and unusual phonograph which worked by way of a rotating metal disc. I remember her looking very smart when we all set off morning service at Ropley church.

Jack was the first person to see us when we reached Ropley, as he came to collect us in the Stuart-Smith’s Rolls Royce. I think this was a 1928 Silver Cloud model and  was lovingly cared for. As Hall Place chauffeur, he told stories of taking the lady of the house to glamorous places to shop, such as Tunbridge Wells. 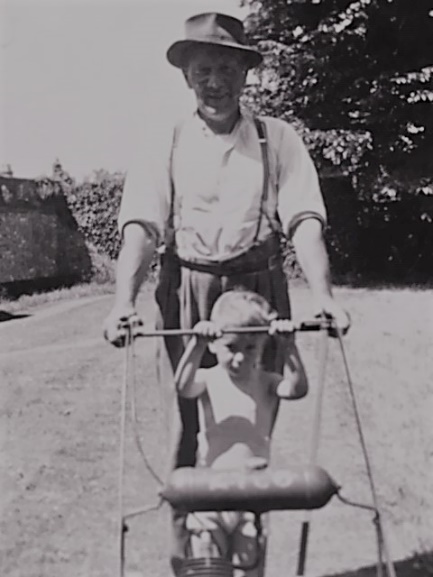 Helping Jack to mow the grass

His duties also included mowing the extensive lawns, growing vegetables in the walled garden and tending the greenhouse where there was a large grape vine. He also called at the house every morning to start an engine in a little hut at the back of the kitchen which pumped water from a well underneath the house into a tank in the roof for use during the day.

I was fascinated by the way Jack mowed a circular lawn with his Atco motor mower. The trick involved putting a post in a hole in the very centre of the lawn, then attaching a rope to this and the mower. With careful handling, the mower was set in motion and the rope wound itself round the post, gradually pulling the mower into the middle where it was halted. What an ingenious labour-saving idea!

The kitchen featured an Aga cooker and large scrubbed pine table with benches on either side. I remember the distinctive smell when the covers were lifted on the Aga hot-plates. These had special heat-diffusing coiled metal handles.

There were a number of outbuildings at Hall Place, but the most memorable were the stables which were full of tack and saddles, but no horses. The bridles, reins and bits were displayed in dusty glass-fronted cases. This was my first experience of a “time-warp” and even as a small child, I spent a lot of time wondering what life would have been like in the days of riding and fox hunting at Hall Place.

I remember the distinctive sounds of the horses and hounds going by Hall Place on the Petersfield Road. I would run to the gate to get a good view of this impressive sight which certainly never happened at my home.

We used to visit this couple who lived in a bungalow on the other side of the road further down from Hall Place. I cannot remember the exact reasons for knowing them, but I think there was some connection with my Father’s first wife Ivy, who was once in service in Ropley. I think that Jack actually built the property and I do remember it having wells for water and a fish pond with large carp in it.

Laurie and Fred were good friends of Aunt Nell and my parents and lived in a wonderful low-ceilinged house in South Street previously occupied by a family called Windibank. The house is very old and the date of construction is set in flints into the brickwork. Fred was a builder and I suspect a number of houses in Ropley bear some evidence of his work. He had a son called Arthur and his wife was Maureen. They had two children called Christopher and Julie (not certain of name). Christopher was about my age and we would go to the “Rec” ground to run about and play on the see-saw. We also used to go out in Arthur’s Ford Popular car, which for me was a great thrill as my parents didn’t drive. 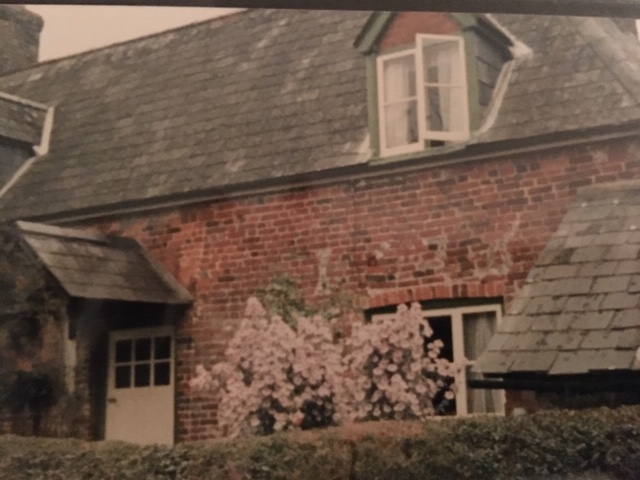 My final visit as a child coincided with my first year at secondary school and we all had to present a “what I did on my holidays” session in front of the Headmaster. I chose to present my Ropley experience and cannot recall much detail of what I included, but I did walk round the village, talking to people and making notes. I remember visiting the working forge and was impressed with seeing the bellows and fire being operated at such terrific heat.

Many years later, in 1978 or 79, I was married and living in our own first house and was scanning the weekend edition of the Daily Telegraph. In the property section, I saw that Hall Place was being advertised for sale and could not resist sending for the details. As might have been expected for such a prestigious property, a full colour brochure duly arrived and showed the fantastic job someone had made of restoring the place to its former glory. I did not really recognise much of the detail, except the drawing room, which I suspect had changed little in layout since my Aunt’s time. It still brought back those many happy memories!

Comments about this page